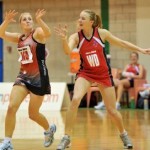 Intrepid reporter Jess Webster from the NT News has wrapped up the weekend in an article discussing the fortunes of the Storm’s 2010 season.
Despite only finishing with two wins for the season Storm coach Dianne Brown says the current crop of players have paved the way for a bright future.
“How could you not be proud of them?” she said.
“Again, patches of inconsistency (and) some errors in transition, but for a group of girls coming from such a wide area and our lack of training environment, I’m just really proud of them.”
“I don’t think anyone would have expected us to get so close to them (AIS), and it just goes to show the depth, talent and the absolute commitment the girls have.”
Read more in your NT News.