A big congratulations to both our premiers from last night. In a very exciting game the Under 11’s came from behind in the last quarter to win by a goal over Hoggies – the first time they have beaten them all year. In the Under 17’s final we won 23 to 17 over Hoggies. A great effort from a team who only lost once in the whole season.

Well done to all the players and their coaches – a great reward for a long season. Thanks also to all the supporters who came done and watched the girls. I think we were the loudest group at the courts. Just need the Masters to win tonight for a clean sweep. 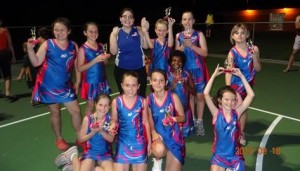 Northern Districts Eagles U11 premiers with their trophies 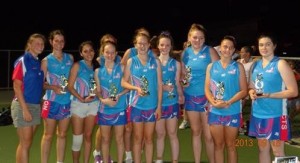